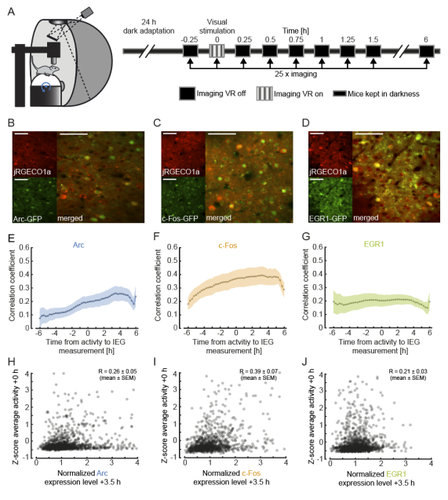 The primary visual cortex (V1) does not just process vision: it also integrates self-generated motion signals (Niell, Stryker 2010; Keller et al. 2012; Saleem et al. 2013; Vélez-Fort et al. 2018; Meyer et al. 2018), enabling us to match our actions to the world we see. We know that the development of visuomotor representation in V1 depends on experience (Attinger et al. 2017; Widmer et al. 2022), but how exactly does each neuron acquire the right balance of visual and motor input? And how do some neurons become more responsive to visual or motor signals? Mahringer et al. (Mahringer et al. 2022) suspected that the answers may lie in experience-specific plasticity mechanisms.

Overall, this work makes two important advances. First, it suggests that IEG expression may be more closely linked to specific forms of plasticity than general levels of neural activity. Second, it reveals a mechanism by which visual cortical neurons can acquire specific functional properties by selectively upregulating bottom-up or top-down inputs in response to particular sensory experiences.

As an additional note, we would like to highlight a vigorous technical discussion that this manuscript triggered: unconventionally, the authors chose not to apply a neuropil correction procedure to their calcium imaging data. This decision split opinion, amongst both reviewers and recommenders. We have come to the view that the findings are nevertheless of interest for the community and are pleased to point readers towards the publicly available reviews and authors’ responses.